I’ll always remember you as the fine blue-eyed, brown haired fellow who cared so much more about others than he did about himself.

My sixth grade “girlfriend” wrote me this message about thirty-two years ago. I wonder if she still remembers me. I look a lot different now.

When I was graduating elementary school, we had the option to purchase an autograph (not a year) book. It was a handsome little book with a faux (green) leather cover that had

our school’s name emblazoned on it. It measured about 5”x7” in size, meant to be held landscape, had a zipper closure and was filled with different colored, blank pages. Each page was meant for a classmate or teacher or parent to offer well wishes for a successful future.

And I distinctly remember this message, as opposed to the other 30 some odd messages in my autograph book for several reasons. It was from her, I felt it was a little bit impersonal (not sure what I was looking for), I was impressed with its style, and, even in my adolescence, while her message was thoughtful and meant to be nice, it bothered me that she thought I cared more about others than myself. But there was evidence to support her assertion then and still today.

Years later, I remember a conversation I had with a best friend who challenged me because I always seemed to yield to oncoming foot traffic. He suggested I was regularly capitulating. Essentially losing. While he was right in that I often do this, I disagreed with his conclusion. In my opinion, I am being harmonious, nice, polite and caring about my fellow citizen. And I don’t consider there to be any consequence in being this way; it’s not as if my doing this sets me back in any way so why not step aside, smile, and know you probably made someone else feel good, which goes a long way to doing the same for yourself.

I have learned there should be no greater love one should have than the love for oneself. While doling out love is not a zero sum game – there’s plenty to go around – it’s extremely important to make sure one’s self comes first. It’s taken me a really long time to learn this. Being in touch with my threshold for emotional pain, I often took a back seat to others because I thought I could help them, which meant in certain circumstances making sure others were happy before I addressed my needs. This is not a good strategy for loving oneself and having a successful life, whatever that looks like.

But as long as I don’t make my needs subordinate to others, I’m going to continue to be a do-gooder, and a help to all.

I will continue to help folks cross streets, help carry large packages, take garbage out for the elderly in my building, and hold doors open for folks. I will continue to ask anyone I see who look as though they’re having problems if they’re alright, and helping out if they aren’t. On the bus or subway, I will still rarely take a seat, and when I do, my head will always be on a swivel looking out for folks who need the seat more than I do. That’s just who I am.

I’ll continue to try and acknowledge every person I come in contact with. I’ll do my best to remember names, and address people with a common courtesy everyone deserves.  And every time I take the subway or bus, I will continue to thank the conductors/drivers for the trip. I will continue to engage every clerk at every store I shop in with a smile, a “hello,” a “please,” and a “thank you.”

I’m not looking for feathers in my cap, a pat on the back, or a “he’s such a great guy,” but imagine for a second if everyone went out of their way to engage others in a gracious, friendly and helpful way. Seriously, imagine that for a second. While it is a wonderful world we live in, imagine just how much more wonderful it would be?

Or folks can at least try…

Like some weekends ago when my family and I drove down to Washington DC for my cousin’s daughter’s bat mitzvah. It also happened to be Memorial Day weekend. In the weeks and days leading up to the affair, we had a fair amount of trepidation about having to take a trip to DC over Memorial Day weekend because as New Yorkers we knew it would be as crazy as Times Square is every day. And we make it a habit to stay as FAR AWAY from Times Square as we can, every day, if possible.

We left NYC early that Friday morning and after a 3 1/2 hour trip, we arrived in downtown DC and went straight for brunch at Founding Farmer’s. I highly recommend eating there if you can. It’s a farm to table restaurant and the food was absolutely delightful. After stuffing our faces with as much food as possible – we weren’t going to be able to doggy bag it – we took off with the goal to take in as many sites as we could as long as time and my daughter’s patience permitted.

We started off at the White House – one of the sides of it – and made our way down to the Lincoln Memorial. It hadn’t been until the Vietnam Memorial that I started to pay a little 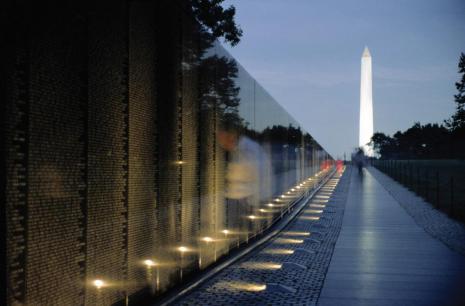 more attention to the fact it was Memorial Day and why we celebrate it. The Memorial is a very solemn and touching reminder of the soldiers who paid the ultimate price for our country’s sake. And I was reminded that we owe them and all who serve our country a great debt of gratitude, whether the war was warranted or not.

So, I made it my mission to shake hands with every veteran I saw and thank them for their service.

There were a great number of soldiers that flocked to DC that weekend, and it seemed most, if not all, were bikers. And that made sense because it was also the Rolling Thunder Run, the world’s largest single-day motorcycle event in DC, a ride originally taken to remember servicemen left behind, which I think has now evolved into a more holistic celebration of all soldiers.

So it was pretty easy to spot a serviceperson. The standard dress code included a sleeveless jean jacket with a lot of patches. And these patches helped me determine who served. Each encounter took a little bit of maneuvering on my part to catch a glimpse of these patches, but once I was able to confirm service I extended my hand and offered a “thank you.” And the soldiers genuinely appreciated it, it seemed.

All was going swimmingly until the end of the day when the walk and the heat had taken its toll. We were exhausted and it was time to head back to the hotel. About a quarter of a mile from our car, we passed the State Department and I noticed a young man emerge from the building. I wasn’t quite sure if he was a soldier so I waited until he walked past us and turned to catch a glimpse of his knapsack. He’d fought in Afghanistan.

He turned and I thanked him for his service… and then SALUTED HIM! Yes, I saluted him. And to make matters worse, it was a lazy salute partially because I was exhausted, partially because I am not, in fact, a soldier, and partially because midway through the salute, in that split second, it dawned on me that civilians weren’t actually supposed to salute soldiers.

I got a lukewarm-at-best “thanks.” And what I think was a semi-malocchio. I hope he recognized the sentiment not for my sake but because I genuinely wanted to thank him. I was a little bummed out but pulled it together so I can be ready for my next encounter, which looked like this…

Later that night in Arlington, after a wonderful dinner with my family, we were walking back to our car when we encountered two blind men. They were headed in a direction perpendicular to us, and I noticed it was directly in line with a tree box adjacent to the corner they seemed to want to get to. They ended up hitting the box.

And that’s when I leaped into action and ran towards them. I think because I have a propensity to help disabled, injured or elderly folks by physically reaching out, gently grabbing their arm, and steering them where the need to go, I instinctively reached out and grabbed one of the men by the arm.

He jumped back startled, his arms flailing and his white cane suddenly looking more like a bo staff. (I have no doubt he would’ve kicked my ass but that’s another story.) I’d forgotten he couldn’t see me, and I honestly didn’t know that you weren’t supposed to grab a blind person’s arm, even gently as an offer of help, and even if he is about to take a tumble into a tree. I guess it’s one of those rules: don’t pat a service dog, don’t salute if you are not a soldier, and don’t grab a blind person’s arm without asking….

In my eagerness to help out, I scared the living shit out of him. I apologized and we moved on. I bore the brunt of jokes that evening, which was fine, but I learned something about myself, which is that I’m going to continue to look out for folks I can help… whether they want it or not!

Epilogue – I wrote this post a few weeks back, before the shootings in Baton Rouge, Minneapolis and Dallas.

Thanks so much for reading!

If you liked it, please share on social media. Not only would it mean a lot to me, but more people will see and enjoy the post. Also, please subscribe to my blog to be alerted once new posts are published – this is a foolproof way to read my work and not be held at the mercy of Facebook’s wicked algorithms!

2 thoughts on “You’re getting my help whether you need it or not!”